In its long history, the provincial seat has been primarily important as the center of the archbishop’s administration, but it is also an old commercial center. Today it is a city of 146,000, the fourth largest in Austria. The castle depicted on the badges is also connected to the archdiocese. In 1077 it was built on the 506-metre-high castle hill at the initiative of Archbishop Gebhard. The expansion of the castle lasted continuously for the following centuries, but it was besieged only once during the German peasant uprising of 1525, without success. It was renovated in the second half of the 1800s, and from 1892 it was already a tourist attraction.

Salzburg’s home regiment was the 59th Infantry Regiment. This regiment, like the other Austrian-supplemented regiments, enjoyed great prestige and had a truly outstanding combat value. Two of its badges are known, both showing Hohensalzburg Castle, but from a slightly different angle. The smaller badge is known with several dates, and some pieces had an enamel band of the same color as the regiment’s lapel color. Best known image of the castle is the panoramic view from the hills on the Northern part of the town, from the opposite side of the river Salzach. We can see the castle at the angle on the badge, as it is shown on the postcard: 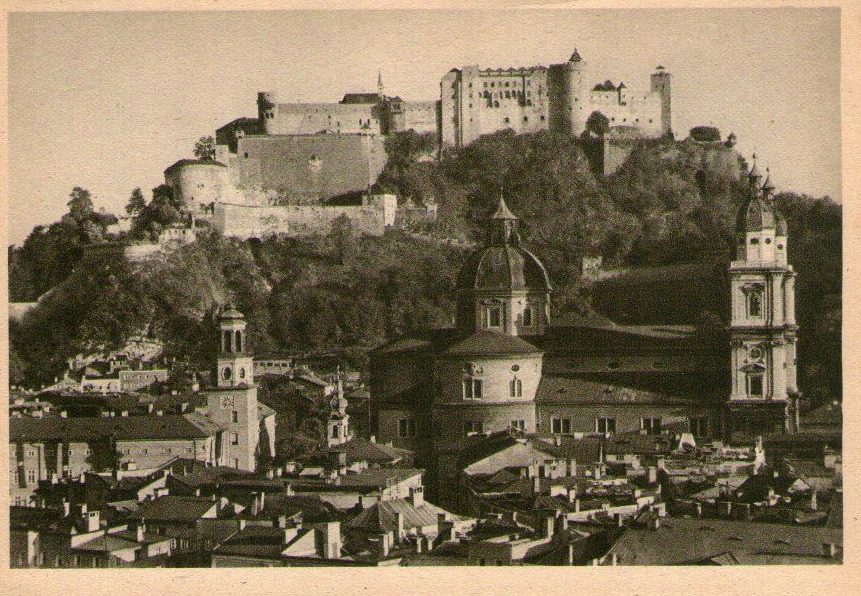 The other badge is much larger and more ornate with symbols and messages that are almost overcrowded. The regiment number s decorated with alpine edelweiss (the regiment was subordinated to the 3rd infantry division, also known as the “Edelweiss Division”). Across the flagpole, Austria’s two-headed eagle war flag is displayed. The badge’s inscriptions are pathetic, too. To the left of the number is “World Burn 1914-1916”. The banner under the flag reads, “The Edelweiss was dedicated to the Alpine Corps by Archduke Franz Joseph Ferdinand”. And the inscription on the inside of the circle that closes the badge reads: “Oh homeland, oh Austria, who compares to the red Rainers? In battle we wear the Edelweiss of Archduke Joseph!” The term “red Rainer” needs to be explained. This refers to the lapel color of the regiment (I think it is more orange than red) and the regimental owner, who was Archduke Rainer (1827-1913). The castle was pictured here from the western side of the castle hill, as shown on the postcard: