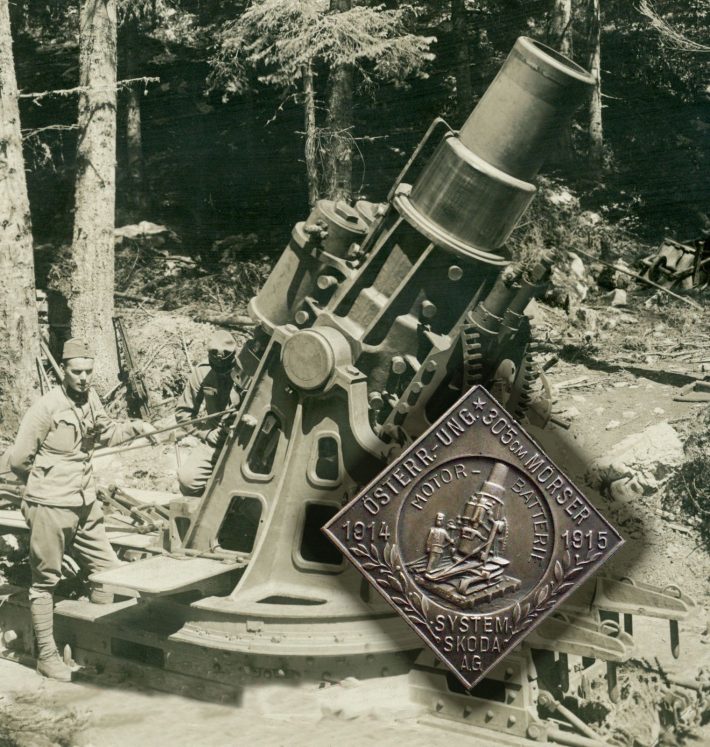 One of the Monarchy’s best-known and presumably best weapons was the 30.5 cm mortar. Officially known as Skoda 30.5 cm Mörser M.11. The gun was developed specifically for offensive purposes to combat Italian and Belgian concrete forts built before the Great War. The development took place between 1906 and 1911. The weapon was able to strike through 2 meters thick reinforced concrete. For this purpose, a 384 kg projectile was fired with a delayed igniter. The other, lighter projectile (287 kg), detonated an eight-metre-deep crater in the ground and was able to kill all people within a radius of hundreds of meters. The gun could be transported in two parts with a road tractor. The name “Motor-Mörser” comes from the motorization which was very rare at the time. It weighted more than 20 tons, so it could only be moved on high-quality solid surface roads. It had a barrel length of 3050 mm. It had a maximum range of about 10 kilometers. Rate of fire was 10 shots an hour. 15 soldiers strong staff served it. The gun was charged by a lifting device mounted on the gun’s toe, which could be used to load the projectile into the horizontally standing tube from the special carriage car carrying the projectile. After that, i.e. before each shot, the gun had to be recalibrated. This process allowed a relatively low rate of fire. Eight pieces of the modern new weapons were loaned to the German ally at the beginning of the war. The first shots from this weapon were fired at the beginning of the war on the Western Front to fight the Belgian fort ring (Liége, Namur, Antwerp). After that, the 30.5s were deployed only for the application of the Monarchy on all the fronts concerned. In total, about 100 guns of this type were produced by Skoda. According to descriptions, only a few shots were fired a day with the guns, partly due to a lack of ammunition, but also because of the concealment of the guns. One of the most important tasks of enemy observers was the discovery of heavy artillery. The 30.5 was a popular weapon with great propaganda value. There are many different Kappenabzeichen depicting the gun. Two of the badges in the post have inscriptions of the battlefields during the deployment in Belgium. Another, rather artistic badge shows it with less detail and no captions. The series is finished with a badge labeled “Motor Batterie” depicting the mortar projectile. In addition to other general badges decorated with this gun, there were fort artillery and heavy artillery units that also put the Austro-Hungarian peak weapon on their badges.